Call for the Canonical Correction of the Pope ! 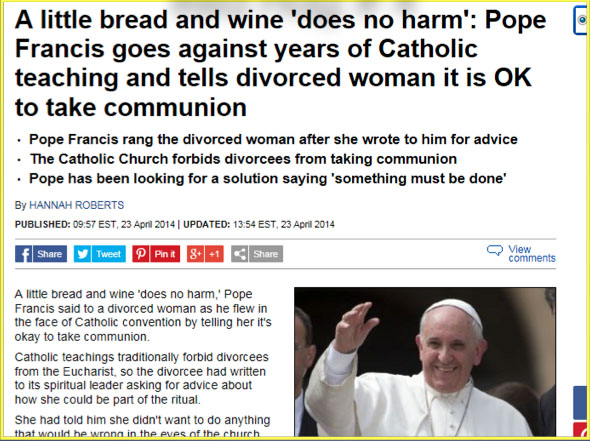 Veri Catholici calls for the Canonical Correction of the Pope

Rome, Italy: Nov. 10, 2017 A. D. — Yesterday, Veri Catholici, the International Association of Catholics who oppose the errors promoted by Cardinal Kasper called upon the Roman Catholics of the Eternal City to rise up and demand the canonical correction of Jorge Mario Bergoglio. Our Appeal was published in the Roman edition of « Il Giornale », one of the more important conservative newspapers of Rome.

Our motive in doing this was purely, principally, formally and entirely ad maiorem gloriam Dei, that is, for the greater glory of God (the motto of St. Ignatius of Loyola), in which consists the salvation of the greater number of souls.  Principally out of supernatural charity for the soul of Jorge Mario Bergoglio on account of the very deep errors into which he has fallen on account of his monstrous pride.

As can be seen from our official English text of our Open Letter to the true Catholics of Rome, published here below, we have chosen to speak in the apocalyptic language of the Apostle St. Paul, our Patron, to make it clear to all Catholics the true theological vision which must be employed when considering the grave crisis into which the Cardinals have led the Church on account of what they did and failed to do during the Conclave of 2013.

We shave chosen this sharp apocalyptic and prophetic language because as it sometimes happens, when a soul falls into the most horrid errors and is attached to them with an unnatural loyalty, the only remedy left as a final medicine is a severe and sharp reprimand, reproval and remonstration.  To all Catholics who have knowledge of the errors of Bergoglio, but who have failed to call for his Canonical Correction — the last chance he may have to be saved and retain the office of the Supreme Pontificate — we direct our appeal to act! so as to avoid being stained by his same errors and sharing thus in the horrible and eternal destiny which awaits all enemies of Christ Jesus, the One Master of All and the Eternal Truth of God!

Here is the text of our advertisement, in our official English translation. 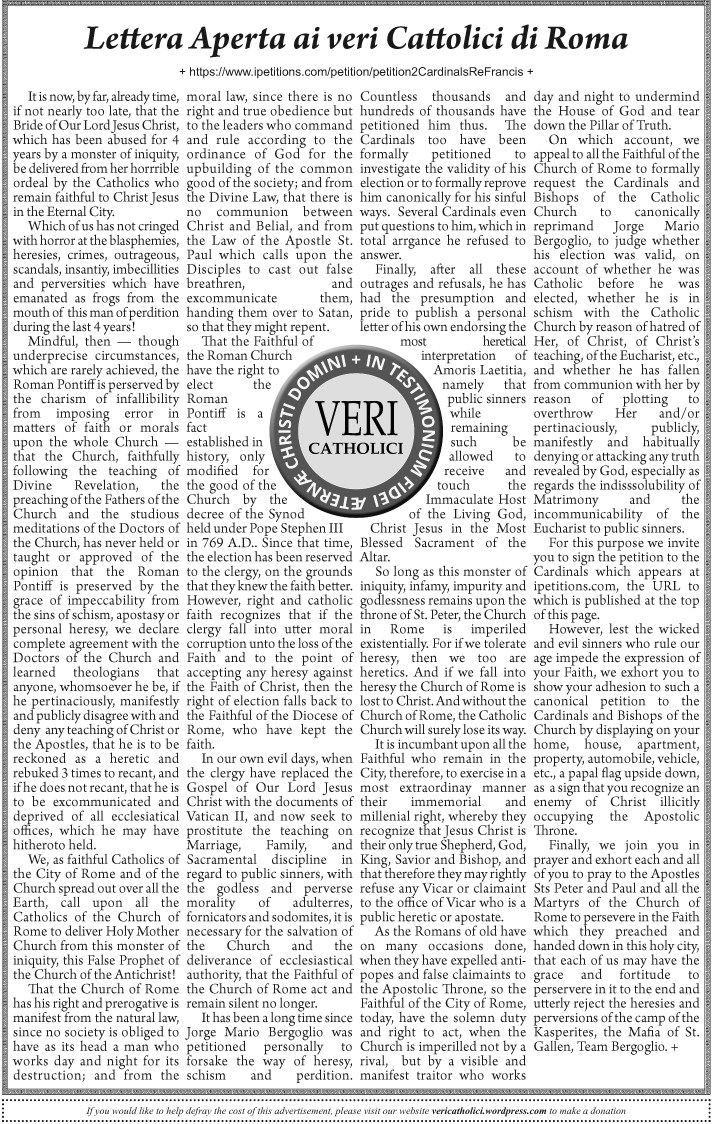 My Comment : I will sign the petition myself, probably one of the best and courageous letter since the beginning of this terrible Pontificate, I confess the words are strong, the letter speaks of monster of iniquity, false Prophet, Church of the antiChrist, man of Perdition…etc….well Nothing else to add.

16 thoughts on “Call for the Canonical Correction of the Pope !”