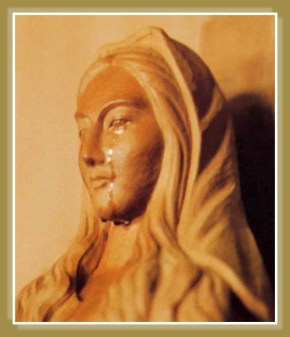 The Amazonian Synod opened on the 6th October 2019 and closed on the 27th of the same month. If you have been following the narrative of the Synod in full or even in part, you may, like many across the Catholic World,  have also been left with a very deep sense of unease, even sadness.

Liberation Theology has certainly played its part, as also the move by German Bishops to establish a more decentralised Church Authority through what would become the chaos of a Church rebuilt on a foundation of Synodality. Also there was the topic of the ordination of women to the permanent diaconate (a slippery road toward a female priesthood), married priests and finally and most serious of all, the introduction of paganism in to the liturgy disguised as cultural inclusiveness, cultural dialogue and cultural environmentalism, alongside concerns for indigenous peoples, the wider topic of climate change and ‘sins against mother earth,’ and not least the bowing down to and prayers around the Pacamama Idol in the Vatican gardens (presided over by Pope Francis) and its placement in Vatican Churches and at Synod press conferences.

Add to this; the outrageous Vatican agreement with the Chinese Government in recognising its version of Catholicism and State appointed clergy; the widespread persecution of Chinese prelates and laypeople faithful to Rome; the Communist State’s recent destruction of Marian Shrines and now its more recently mandated destruction of some 40 churches (in which Catholics are barricading themselves in to as I hastily write this article); the arson of some 200 churches across France, not forgetting Notre-Dame Cathedral, fires at Coptic Churches in Greece and the spreading of vandalism effecting Churches across the west,  it is perhaps no coincidence that Heaven has intervened and did so on the 6th of October 2019.

An angel’s appearance and message to Sister Agnes Sasagawa, visionary of Akita.

Around 3.30 am on Sunday, October the 6th 2019, the same angel that appeared to me 30 years ago in Akita appeared. Firstly the angel gave to me a private message. After that the angel told me the message for everyone.

“Put on ashes and pray for a repentant rosary every day. You (Sr. Agnes) must become like a child and make sacrifices every day.”

I offer as a reminder, the below text taken from the message given to Sr. Agnes on the October 13, 1973 by Our Blessed Mother:

“My dear daughter, listen well to what I have to say to you. You will inform your superior.”

After a short silence:

“As I told you, if men do not repent and better themselves, the Father will inflict a terrible punishment on all humanity. It will be a punishment greater than the deluge, such as one will never seen before. Fire will fall from the sky and will wipe out a great part of humanity, the good as well as the bad, sparing neither priests nor faithful. The survivors will find themselves so desolate that they will envy the dead. The only arms which will remain for you will be the Rosary and the Sign left by My Son. Each day recite the prayers of the Rosary. With the Rosary, pray for the Pope, the bishops and priests.”

“The work of the devil will infiltrate even into the Church in such a way that one will see cardinals opposing cardinals, bishops against bishops. The priests who venerate me will be scorned and opposed by their confreres…churches and altars sacked; the Church will be full of those who accept compromises and the demon will press many priests and consecrated souls to leave the service of the Lord.

“The demon will be especially implacable against souls consecrated to God. The thought of the loss of so many souls is the cause of my sadness. If sins increase in number and gravity, there will be no longer pardon for them”

“With courage, speak to your superior. He will know how to encourage each one of you to pray and to accomplish works of reparation.”

“It is Bishop Ito, who directs your community.”

And She smiled and then said:

“You have still something to ask? Today is the last time that I will speak to you in living voice. From now on you will obey the one sent to you and your superior.”

“Pray very much the prayers of the Rosary. I alone am able still to save you from the calamities which approach. Those who place their confidence in me will be saved.”

Below is the Link to WQPH which came to the public domain in the UK from Nick Donnelly @ProtecttheFaith with whom I am privileged sometimes to correspond with via Twitter.

It would appear I was but one among many that sought formal confirmation on the veracity of this recent event, which was requested directly to WQPH via private email. The response received was the release of an official statement published on their Web Site which, is summarised below

WQPH stands by its sources for the story “A new message from Sister Agnes of Our Lady of Akita. The editors confirm it was obtained ‘through sources close to her (Sr.Agnes)’ and has already resulted in ‘new tribulations for her and her confidants.’

WQPH further states it has ‘no reason to take on the risks associated with publishing a sensational story such as this new message from Sister Agnes Sasagawa, other than on behalf of sources, who are both reliable and courageous, and who have asked us directly to spread her message.’ and concludes, ‘until we can obtain more information from our source, we ask you, our brothers and sisters in Christ, to discern with faith and reason the veracity of the story, and we thank you for your prudence and devout concern for the integrity of the legacy of Our Lady of Akita and the reputation of her messengers.’

I encourage you to visit their web site for the full statement and a more recent English translation of the message.

My comment: Contributors to this blog, know only too well the importance of prudence when discerning the credibility of private revelation, its interpretation for our times and how it should be applied to our journey in faith, our listening and our responding to Heavenly calls.

There is no obligation to believe and this applies (to the best of my knowledge) even to ‘Approved Apparitions.’ It therefore remains up to each reader to chose a response. My view and for what it is worth; I sense the event and message to be true, not least because of the integrity of WQPH. The message asks nothing of me that is even subtly contrary to the Faith, is not in the least sensational or alarmist in nature and most telling of all is none specific even in the context of current/recent Church events (i.e. doesn’t point the finger and is non-judgmental in nature). The simplicity of the message’s imagery hides the depth of its meaning and its timing is right on point because clearly the Church is fast approaching a most critical and decisive moment in its history. Yes there have been a few, but none like this. Why do I say this? If for no other reason (and there are many we could list) it is simply because never since the beginnings of its foundation has Heaven intervened so publicly and warned so consistently with such increasing intensity as it has in these last 100 years or so.

I leave you with a question. How are we to respond to the phrase “Put on ashes” as in the context of Jonah’s prophesy? I was asked recently if  it is meant to be taken literally.

‘We are back in contact with our source (thank you to all who offered prayers!) who promised to send a “more detailed message” soon. In the meantime, she encouraged us to watch the following video which we are not able to embed on this site, so we have linked it below…

Our source reiterated that Sister Agnes finds this video to be a good account of the message of Akita and its backstory. Sister Agnes speaks throughout the video.’

My comment: We await further news, I would encourage all readers to share links to this video and page on social media pages in order spread the message of Fatima and Akita. Also, please don’t be perturbed that Garabandal is not mentioned here, remember we still await Church approval.

On another note, I was wondering about the ‘Repentant Rosary’ and discovered it is a devotion approved by the Church. it was taught to Maria Concepcion Zuniga Lopez by Our Lord on December 26th 1970. Rather than me re-type it here, please go to the link provided below and book mark the page for your future reference. I hope you join with those who are now praying this Rosary as instructed by the Angel to Sr. Agnes.

Below is the English transcript from the original Japanese given to WQPH by its sources representing Sr. Agnes

“The other day, I just sent you a correction email regarding Sister Agnes Sasagawa. Let me write something important else.

On October 6th, after an angel appeared to Sister Agnes, Sr. Agnes said to Sister M. “I felt the time is near.”

I got a new permission of Sr. M via Mrs. S to write it.

This “I feel the time is near.” means the time of the message of Our Lady of Akita (Oct 13 1973) which, was given to Sr. Agnes. I think it will be easy to understand to write the message.”

Note from WQPH: ‘We will continue to work on obtaining more detailed information, and once again stand by the credibility of our source.’